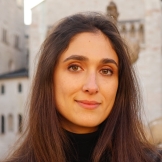 Beatrice Bono is a Law Graduate from the University of Trento. Her dissertation, “The status of Jerusalem under international law”, was focused on several aspects of the law of occupation, the law on the use of force, the non-recognition principle, the right to self-determination and the protection of cultural heritage during armed conflicts. Beatrice has been an exchange student at the Universität Trier in 2016-2017 and at the Hebrew University of Jerusalem in 2019. She completed her studies and received her Master Degree in Law with full marks in December 2019.

She has several volunteering experiences with a small Italian NGO active in Ethiopia and with AIESEC Trento. She also took part in the “Rome Model United Nations” 2016 in the UNHCR section and in the ELSA Trento’s Moot Court “Open Legislation” 2017.

Beatrice is an Italian native speaker. She is proficient in English and has a good command of German and French. She also has a basic knowledge of Spanish.

She can be contacted at: beatricebono95@gmail.com